On the 10th of November of 2000, UNESCO declared Sumaco – Napo – Galeras National Park and it surroundings Biosphere reserve, only granted to the most valuable cultural and natural protected areas.

There are three Biosphere Reserves on Ecuador’s soil: Galapagos, Yasuni, and Sumaco; all part of a global network of Reserves, 380 in total and in 91 countries.

Sumaco Biosphere Reserve has an extension of 902 000 hectares and encompasses 3 major areas: Napo – Galeras National Park, Sumaco volcano area, and the latter’s surrounding. Sumaco is an impressive 3732 meters high volcano located 50 kilometers east of the eastern slopes of the Andes, in the Napo province.

Around 80 000 people live around the Biosphere Reserve’s natural protected areas, and among them, 70% are of Quichua origin and 30% are « Colonos – mestizos ».

The Sumaco Biosphere Reserve extends its limits within 3 Ecuadorian provinces (Napo, Orellana, and Sucumbios) and it harbors 7 of the 25 life zones existing in the entire world. It goes from highly humid tropical forests at 600 meters up to 3 732 meters above sea level, where only Andean Paramo prevails.

The Sumaco Biosphere Reserve’s nucleus (Sumaco National Park and Napo – Galeras National Park) and its direct areas of influence are highly protected and the population around it receives help to use natural resources in the best possible way. The approval of Biosphere Reserve status provides new opportunities for activities oriented towards conservation and sustainable development. Biosphere Reserves are famous worldwide and therefore there is an increase in tourists’ interest in visiting the Sumaco area.

Although field studies haven’t covered the whole extension of the park, it can be said that biodiversity levels are remarkably high, and the place has proved to be worth protected in a sustainable way. Within the boundaries of the Park, more than 6000 species of plants have been identified, among which 100 species of palms (60% new to science) and 20 new species of orchids.

As far as fauna is concerned, 101 mammals have been recorded, including half of all the species of bats found in eastern Ecuador. Besides, 58 species of snakes, 31 species of toads and 6 species of turtles have been observed, a high quantity indeed compared to other areas of the country.

Among the mammals we can mention the puma (Puma concolor), the ocelot (Leopardus pardalis y Leopardus wiedii), the anteater (Myrmecophaga tridactyla), the otter (Lontra longicaudis), the tapir (Tapirus pinchaque), the giant armadillo (Priodontes maximus) and the spider monkey (Ateles belzebuth). Some endangered species can also be found here, such as the spectacled bear (Tremarctos ornatus), the jaguar (Pantera 0nca), the cock of the rock (Rupicola peruviana) and the military macaw (Ara militaris).

This Sumaco National Park is one of the less known and explored nature protected area in Ecuador, an ultimate frontier for Wilderness. 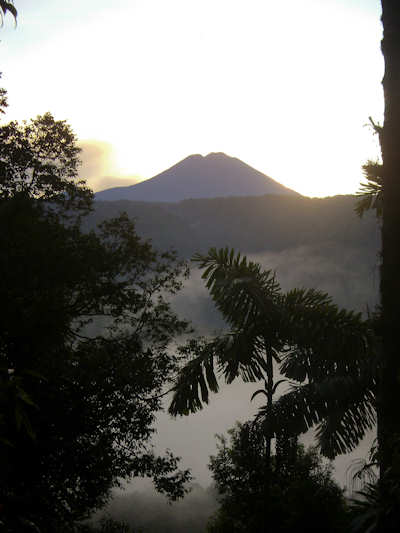 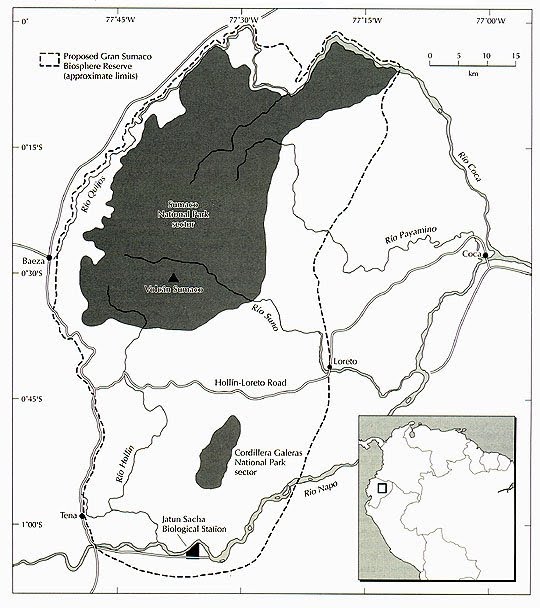